Hi, what are you looking for?

LA Galaxy: Alessandrini Put In A MOTM Performance vs Columbus

Galaxy re-sign Ema Boateng: Ways they should use him

El Trafico Tone Has Been Set: LA Galaxy vs LAFC

What Key Injuries Mean for the LA Galaxy

LA Galaxy: 10 Games Remaining, What to Look for

On July 7, 2018, the LA Galaxy played at StubHub Center against DC United. Zlatan Ibrahimovic was officially the man of the match, arguably, it should have been Romain Alessandrini. Many of the other Galaxy players, such as Ola Kamara, have been cast in the Lion’s shadow.

Kamara arrived in January of this year to play for the LA Galaxy. He came from Norway and his last club was Columbus Crew. He’s one of the top goal scorers in the MLS over the last two years and he personally said he wanted to be scoring goals for the Galaxy when I interviewed him at the jersey launch party.

But, then, Coach Sigi Schmid played him as a midfielder when Ibrahimovic joined the team, which just isn’t a position for him to shine like he deserves, be comfortable, or score. Straight up, it’s just better for the Galaxy to use formations that allow Kamara and Ibrahimovic to be up top and both play as strikers.

Definitely egos and power struggles amongst teammates is a concern. Ibrahimovic and Alessandrini don’t hide when they’re frustrated. On the 4th of July match, it looked like Ibrahimovic might strangle a teammate. He walked off the pitch alone and visibly angry at the end of the match, which resulted in a 2-2 draw against DC United.

On July 7th, Ibrahimovic played phenomenally, of course. But, his skills really showed when he did a nutmeg on Lalas Abubakar and then a trivela cross. This was after Ibrahimovic drew a penalty when he was fouled by Abubukar, which he scored in the 57th minute.

Kamara was taken out of the game in the 60th minute after an injury break as a precaution. He’s been dealing with a calf strain. Alessandrini replaced him. Alessandrini scored in the 67th minute. Then, less than 5 minutes later, Ibrahimovic was subbed off for new-hire Sheanon Williams.

Usually, Alessandrini is in the starting line up and Ibrahimovic has been playing full 90 minutes, but this switch off works to balance out their personalities and powers. Another good move was taking Giovani Dos Santos out of the equation for Emmanuel Boateng.

The Galaxy still struggle in holding the ball and on defense, especially in a midfield full of holes, but they pulled off a 4-0 win against Columbus Crew, which currently hold 4th place in the Eastern Conference to the Galaxy’s 8th place in the West. The Galaxy really needed this win after two back-to-back draws against two teams that are the lowest on the MLS table. The winning needs to continue if LAG is to make it for the playoffs.

Alessandrini should have been man of the match because despite doing Zlatan things, Ibrahimovic often stands and just watches, then gives half effort. Meanwhile, Alessandrini non-stop attacks, makes plays, goes for goal, and defends. He’s all over showing his number 7, which is a difficult position to play and a game changer. 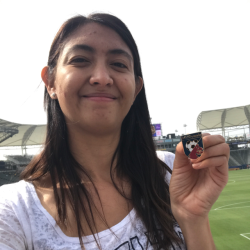 Battle for LA Ends in a LAFC Come-from-behind Draw

The Los Angeles Football Club (LAFC) welcomed their rivals the LA Galaxy to Banc of California Stadium to finish off rivalry week and hoping...

LA Galaxy have got off to a decent start to the season while setting some early markers. They won their home opener, but were...

Galaxy re-sign Ema Boateng: Ways they should use him

The LA Galaxy continue to round out their roster and announced the re-signing of midfielder Emmanuel Boateng. The 24-year-old who has 87 matches in...

El Trafico Tone Has Been Set: LA Galaxy vs LAFC

You’ve seen them all over the world in soccer for decades, rivalry games. Although the MLS has some rivalries that have a bit of...

In any soccer club around the world it is important that two things happen each season: You win a trophy. You beat your rivals....

LA Galaxy are trending down. We all see it. Even during their seven game unbeaten run LA Galaxy were not playing very well. They...

What Key Injuries Mean for the LA Galaxy

All three designated players are now down, but the LA Galaxy are not out. The LA Galaxy have been cursed with bad health this...